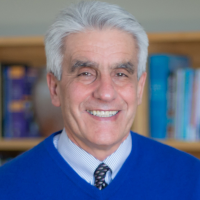 Dean of the College of Education
University of Iowa

Nicholas Colangelo is the Dean Emeritus of the College of Education at the University of Iowa and Director Emeritus of The Connie Belin & Jacqueline N. Blank International Center for Gifted Education and Talent Development.  He has authored numerous articles on gifted, co-edited three editions of Handbook of Gifted Education, and co-authored “A Nation Deceived: How Schools Hold Back America’s Brightest Students” (2004) and “A Nation Empowered: Evidence Trumps the Excuses Holding Back America’s Brightest Students” (2015).

Dr. Colangelo has served on the editorial boards of major journals including Counseling and Development, Gifted Child Quarterly, Journal of Creative Behavior, Journal for the Education of the Gifted, and Roeper Review. As well, he has presented a number of research papers and keynotes at national and international conferences.  He currently serves on several Advisory Boards for Colleges of Education, and Centers for Gifted/Honors.